What The Hell Wednesday 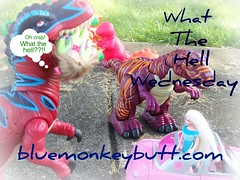 Wednesdays are great for Wordless and Wordful posts, but we decided to go a different route and create our own Wednesday fun. We figured what the hell. That’s how we started What The Hell Wednesday. Who are we kidding? That’s pretty much how we decide on almost everything. If you want to play along, grab our button on the sidebar, link up to us in your post and don’t forget to sign in to McLinky below. Really, what the hell?

Here I am doing WTHW on Wednesday morning at 6:30 a.m. after a whole 5 hours of sleep and two sips of coffee.  Yeah, this should be real good.  I wanted to get this done last night, but apparently there are not enough hours in my day to get everything done.  About two weeks ago, “Thing 2” went to a sleep over at a new friends house.  When he came home he was all gung ho about doing chores, I guess at his friends house he had to do the dishes and make breakfast.  The first reaction I had was , “ahhhh, you could of been burnt”.  But, yes he is 10, and I was probably babysitting at 10!  So he made up this loooooong list of chores and said he would do them every single day.  I gave him a week until he stopped.  Sure enough after 2 days of not doing any of the items on his “to do” list I asked him why, he said, “well….I don’t feel like doing them anymore, and with Christmas coming, I really don’t need the money.  I’m going to get plenty of presents and I won’t need to buy any toys this month.”  What The Hell??  Truthfully his logic does make sense, why would he need money when Christmas is this month??  I didn’t tell him that, I told him that he had to do certain things every day or else he wouldn’t get allowance or get to play video games!

Saturday afternoon I took Thing 1 and Thing 2 to the Christmas Parade to freeze to death.  Thing 2 could of walked in the parade for Football, but he didn’t want to do that this year.  So there we stood freezing to death waiting for the parade to come by.  When it finally did, the people in the parade of course threw candy at the people watching.  This made all the kids run, push, slide and kill each other for a piece of candy.  I started hearing other Mother’s yell, “Timmy LOOK, they’re throwing candy, get out there!!!  Get it!!!  Get it Timmy!!  Get it, it’s a tootsie roll!!!!”  What The Hell?  Is the Tootsie Roll Timmy’s dinner tonight or something??  It’s a 5 cent piece of candy, or a broken candy cane, who the hell cares??  Of course that’s all the parade was about, parents yelling at their kids to fight over a piece of candy thrown at them.  In the end, Thing 2 came home with Magic Reindeer Food, a ton of broken candy canes, a few Lindt balls, and a T-Shirt from the Police Department.  Yeah he just has that sweet innocent, give me stuff look to him.

I finally got a call from the Special Education Department Monday about setting up a meeting to have Thing 2 tested yet again.  Funny how this happens every single year since he was discharged from his I.E.P. in Second Grade!!  But I won’t go on a rant about that right now.  So, the woman calls me and says they want to have the meeting Friday at 10:55 a.m.  Wow, how convenient, right in the middle of the day!  So I ask her, “is there an earlier time I could have?”  And she says, “well I have Monday at 10:55 a.m.”  What The Hell?  First off, that’s a later date, and the same time of day, (I really want to insert a sarcastic “Special” comment here, but won’t)  I say, “I’m sorry I was looking for an earlier time in the day, I do work during the day, and 10:55 a.m. is pretty much in the middle of the day.”  Of course they can’t do another time, and if you don’t come to the time they specify then they will have the meeting without you there, and make a decision without you.

Stacy did such a good job on her WTHW post that I can just skate by.

I’m getting really sick of the spam comments we’ve been getting lately. Why do they always put their names in all caps? Do they think by doing that we’ll think they are important and automatically approve it? Really? What The Hell??I’m letting you know right now, if your name is in all caps I automatically spam it without even reading the comment. Then there is the comment “Love your site but your coding sucks.” Oh, sure, insult us and we’ll approve your comment. Ummm….no..go away losers.

Yesterday I cleaned out all 3 of the freakin’ litterboxes and this morning I went downstairs and because of the driving rain we are having, our basement window leaked and the water splashed into the litterboxes. What The Hell Mother Nature???!!! Now I need to buy another big bag of stupid cat litter and clean them out again. There’s no way the cats are going to use soaking wet litter boxes and if I move them, they won’t know what to do and probably go somewhere they shouldn’t. Crap.

I got the stitches in my head out the other day and as it heals up I have a nice dent in my forehead that fits the corner of my dresser perfectly, 90 degree angle and all. What The Hell???!!! At least the bruise on my arm is going away. I guess I’ll be looking for a new hairstyle. I’ll go to my hairdresser and ask for a hairstyle that hides dented foreheads. I’m just so awesome. Maybe dented foreheads will become a fashion statement and then I’ll be in style for once in my life. What? It could happen.

2 Responses to What The Hell Wednesday